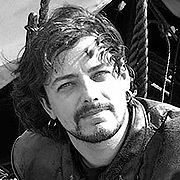 Born in Winnipeg, Canada, David Krentz graduated from the Character Animation program at California Institute of the Arts in 1993. He was immediately hired into Walt Disney Feature Animation as a Layout Artist. He migrated into a Lead Character Designer position for a four year stint on Disney’s Dinosaur. His love for dinosaurs, anatomy and character proved a valuable asset to that benchmark CG film. After leaving Disney he went on to pursue a freelance career, where he stretched his creative wings doing many different kinds of jobs on many different projects. He enjoys sculpture (digital & clay), storyboarding, creature/character design and concept illustration. He maintains ties to the scientific community, where he often lectures on developing performance-centric creatures for film and recreates new dinosaur finds from the bones up. David is one of the founding members of Ninth Ray Studios, a super-group of story driven concept artists. He contributed to such movies as Fantasia 2000, Dinosaur, Treasure Planet, Spider-Man 2, Valiant, The Ant Bully, John Carter of Mars and Outlander as well as many other live-action and animated films currently in pre-production.