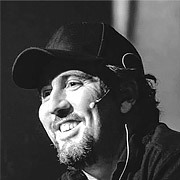 Miguel Ortega boasts a varied career working for some of the world’s leading film and visual effects studios including Luma Pictures, Rhythm and Hues, Lightstorm Entertainment, Cafe FX, Tippett Studio, and Digital Domain, where he focused primarily on creature modeling and texturing. His talents have been showcased as a visual effects artist, modeler and creature designer on over 20 games and feature films. Expanding on his skills beyond these studios, Miguel went on to direct his own short films, handling everything from design to production. He has worked on titles including "The Ningyo," Thor, Drag Me to Hell, Red Cliff, Fantastic 4: Rise of the Silver Surfer, 300, and many more, and is a graduate of the Gnomon School of Visual Effects.