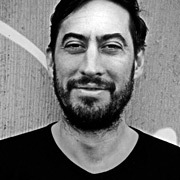 Sebastien Larroude, a.k.a. Rainart, graduated from the Superior School of Photography and Multimedia (E.T.P.A) in France, where he studied audio-visual, fine art and digital techniques. With over ten years of experience in the industry, Sebastien has built a strong reputation as a lighting artist, concept artist and matte painter. He has been invited to speak at various events and workshops including ADAPT. Sebastien currently works as a senior concept artist on the game DeusEX III at Eidos Montreal and has participated in the development of video games such as Myst IV: Revelation, Assassin’s Creed, WET and Indiana Jones as well as many commercial projects with various advertising agencies in France and the United States. Along with his friends David Levy (Vyle), Thierry Doizon (Barontieri), Nicolas Ferrand (Viag) and Joel Dos Reis Viegas (Feerik), he recently started STEAMBOT Studios, a collective of creative artists whose goal is to inspire and push the boundaries of concept art, matte painting and digital art.