Creating an Illustration from A to Z

In this workshop, Senior Art Director and Illustrator Pascal Blanché guides you through his entire process of creating an illustration in his signature style. Pascal starts the creative process by gathering reference images and inspiration through sci-fi and fantasy. Using 3ds Max, he begins by posing a base character model followed by a kit bashing session to block-out the overall design. He then refines his character and assets with a detailed sculpting pass in ZBrush. Pascal takes the model into KeyShot for materials, lighting and rendering, then moves into Photoshop for final 2D adjustments. Using various passes and blending techniques, the image comes together through a creative methodology that Pascal has fine-tuned over time; one that results in a powerful, non-photoreal, style reminiscent of comics and 80s fantasy illustration. For those looking to explore efficient and creative techniques that combine 2D and 3D tools, this title offers a glimpse into the creative workflow of one of the industry’s most revered artists. 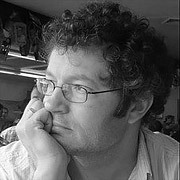 Pascal Blanché is a French artist, born in Paris in 1971 and raised in the south of France. In 1989 Pascal studied, at Marseille's Fine Art school, traditional art, photography and video, then five years later started his journey in the gaming industry. He moved to Canada in 2000 where he first worked on the French/Canadian movie production ‘Kaena the Prophecy’ before joining Ubisoft. He worked for ten years as Art Director on ‘Myst IV: Revelation’, ‘Naruto: Rise of a Ninja’ and James Cameron's ‘Avatar’ before moving to the UK for two years where he worked for Frontier and Jagex. He is now back at Ubisoft Montreal as Senior Art director. Pascal is revered online for his personal colorful illustrations; inspired by memories of his 80's heroes Moebius, Frazetta, Bisley, Corben and many others. His illustrations have received numerous awards and have been published in books and magazines all around the world.