In this lecture, Creature Designer David Meng guides you through his process of designing and sculpting a stylized character maquette. Beginning with the armature assembly and block out, he demonstrates his method for building up a rigid, yet still flexible, base onto which he will build up his sculpture. At this stage, he begins to add clay to begin defining the forms of his "stylized" orangutan character, all the while narrating specific anatomical and creative choices he makes as he builds up the forms. He then moves in with tools to begin fine tuning the sculpture, creating folds and refining forms before moving into the detailing phase. In this phase, he demonstrates how to sculpt skin wrinkles and pores, as well as how to handle long fur on a character. When finished, David creates a highly believable, yet stylized interpretation of an orangutan. 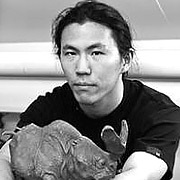 David Meng graduated from the University of Michigan, Ann Arbor in 2000, with a Bachelors Degree in Fine Art, and took Dick Smith's Advanced Professional Make-up Course shortly after. Interested in bizarre, funny and grotesque things from a young age, David had a natural leaning towards working as a creature/character designer in the film industry. David started his career working as a designer/sculptor for various effects houses in LA. In 2004 he was invited to join Weta Workshop in New Zealand, just in time to work on King Kong and The Chronicles of Narnia. He spent the next few years working on many of Weta's other projects, most notably District 9. On District 9, David served as Lead Creature Designer for the movie's Prawns. Other films David has worked on include: Alien Vs. Predator, Black Sheep, Under The Mountain, and The Hobbit. Most recently David worked as part of the concept team that designed the Kaijus for Pacific Rim. His main contribution to the film was the design of the Leatherback Kaiju. David's work has been published in various art-of books and been exhibited at both CoproGallery and The Hive, as well as the Dowse gallery in New Zealand, and also in Shanghai. His work has been included in the internationally renowned publication Spectrum five times (including this year's upcoming edition), and has so far won two Silver awards and one Gold.